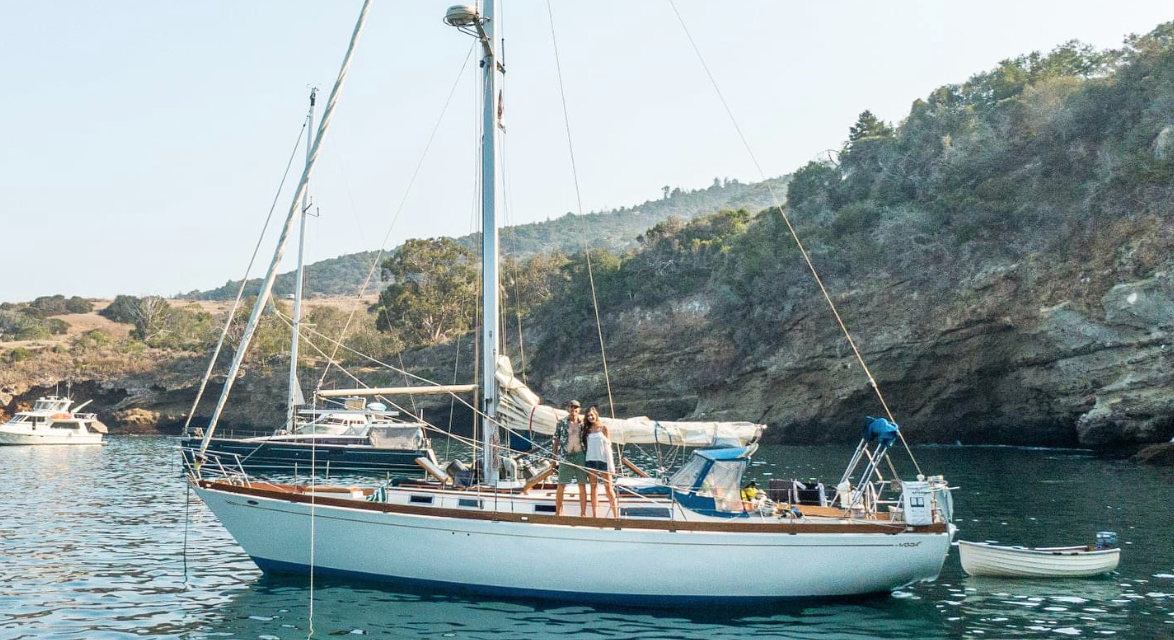 “Cheoy Lee has a high standard and build quality, built to Lloyds standards and are considered classic blue water yachts. Their shipyard was founded in Hong Kong in the 1800’s and is still in operation today making them the oldest still in the business.”

Interview with the Captains — Marissa and Chris Neely

On Long Range Cruising
Who introduced you to boating/sailing?
Chris grew up in a sailing family sailing various “small” boats on high altitude lakes and  sailing their Mason 43’ on the San Francisco bay. I was introduced to sailing at 16 when Chris convinced me to crew with him in the annual High Sierra Regatta at Huntington Lake, CA… we learned a lot about communication that day. Despite the learning curve I eventually got the hang of sailing his (now our) Victory 21’ sailboat and we continued the regatta tradition yearly.

Where have you sailed to, and what was your longest trip so far?
On Avocet we have sailed southern California, doing many shake down sails out to the Channel Islands, practicing our techniques and new systems. In between our projects we sailed Chris’s mom’s Mason 43’ from San Francisco to Ventura which was 3 days of nonstop motor cruising which was a good test of our sanity, listening to the engine rumble for so long. Way back in 2016 we also joined Chris’s brother and his partner on their boat Prism, in Costa Rica for a leg of their cruise, which is actually where Chris asked me to marry him!

Any notable memories/stories from your sailing adventures?
There are so many! One of the most prominent memories I have is when we took my family out for a weekend at Santa Cruz Island, which was huge since none of them are sailors. It was a great weekend until one night the wind piped up to a gale, topping in the mid 50’s, and our snubber snapped off. We scrambled to rescue our anchor chain and boat, while trying to keep calm. In retrospect there were a few things we would have done differently, and now we carry multiple redundancies on various systems. That same night we rescued a 20’ fishing vessel who had lost their anchor, and lent them our stern hook. Luckily, we met again on land back in port to get our anchor back! The full video of this adventure is on our youtube channel, Sailing Avocet: It’s going to happen out there.

Most under-rated piece of equipment for long-range cruising?
This is a great question, we really have enjoyed our new FlopStopper that reduces the roll in anchorages so we can have more peaceful nights aboard. It is large in size, but it breaks down into a storable size making it a no-brainer to keep in the lazarette. We love the product so much we reached out to the owner who has been kind enough to partner with us and give a discount to anyone who mentions “Avocet” at checkout! Flopstopper.com.

In addition to the FlopStopper, we also feel that a quality rowing, sailing, motoring dinghy such as our Fatty Knees 8’ makes cruising around harbors and anchorages that much more enjoyable.  Carrying heavy loads in large chop and high winds effectively and being able to beach without fear of puncturing the hull is really important to us. The most important thing though is its reliability, and versatility no matter what piece of equipment.

Do you have any other notable resources you use (apps, devices, etc)?
Books! So many books from incredible authors such as John Kretchemer and Lin and Larry Pardey, Charles Baldwin, Bruce Bingam, and Lyle Hess. We pull a lot of inspiration from those before us, and hold their opinions in high regard. We also use Navionics and weather apps like Windy and Predictwind for everyday use when at sea and at anchor.

Why did you choose to buy a Cheoy Lee?
Well, we stumbled upon her by fate. We were actually looking at a completely different caliber of boat that was tailored to our college graduate, newly wed, budget which was virtually nothing. However, after quickly realizing our needs would not be met by the boats that were typical of the price range we were looking at, we opened our options up by looking at some boats just outside our budget and that’s how we came across Avocet.

Chris wrote a letter to Avocet’s owners who had cruised her for 30 years and been on many adventures. John, the owner, was in poor health and his daughter was handling the sale. She was touched by our letter and negotiated a fair price that was within our grasps and we signed the papers a week later. We were not initially planning on cruising the world like Chris’s brother Jon (SV Prism) but we were ultimately inspired by the boat because of her design- she was built to cross oceans, and she had!

Cheoy Lee has a high standard and build quality, built to Lloyds standards and are considered classic blue water yachts. Their shipyard was founded in Hong Kong in the 1800’s and is still in operation today making them the oldest still in the business. To our knowledge there are only 8 of our boat designs made.  With John Kretchemers notes regarding what makes a blue water cruiser in mind, Avocet checks every box and even more so now with the modifications we made on her.

What other kinds of boats did you consider before buying this model (and how did they compare)?
As mentioned we had a completely different type of boat in mind. We were so set on living aboard a Catalina 36’ MK II, but after stepping aboard one we realized there was no way we could fit our belongings which were pretty minimal to begin with. Catalina 36’s are great boats that are made for coastal sailing and overnight jaunts, and a handful of people have cruised them, but she just wasn’t the boat for us.

How did you come to find/locate her before purchasing?
We actually drove 8 hours from North Lake Tahoe where we were living to Southern California to check out a Catalina 36’ and when we were shattered by the realization that this boat was not our future, Chris’s brother convinced us to check out another boat for sale nearby. That boat was Avocet. We spent 3 hours going through all of her systems, asking the broker questions, and trying to picture her as our home. Honestly, I took some convincing because I wasn’t keen on her unique interior at first, but I absolutely love it now!

What boats have you previously owned?
Chris and his family have owned a few boats throughout his upbringing which has given him well rounded knowledge on boat design and build. Today he and I still own our Victory 21’ and Hobie 18’ Magnum in addition to Avocet.

What are the features you like most about your boat?
It’s funny, for me the features I hated most at first look are the ones I have come to love the most. Our large circular dinette sits 8 comfortably and is the best table for games. The galley, which was a big selling point for me, has large countertops and the biggest fridge I have seen on a boat our size (Chris’s best explanation: you can fit 10 Large pizza boxes in it)!  Finally our head, which was previously stark white and plastic amongst our otherwise teak interior, was so tediously remodeled to fit our style.

Chris’s favorite features are the attention to details in the general design of our boat. The deck is very open and easy to get around. Large foredeck to secure our Fatty Knees 8’ dinghy. The cockpit is very spacious and with the cupped seats it is a very comfortable underway to both steer and take watch. Going below the headliner and cabin sole are removable so getting to anything that needs fixing is as easy as removing a panel. The amount of storage is just impressive on the boat, every locker or cubby is deep and has very adequate shelving. Lastly the internal fiberglass water and diesel tanks make the headache of corroding stainless or black iron tanks a thing of the past.

What features/improvements have you added or do you plan to add?
We have done so many projects on Avocet. We lifted the V berth bed up to increase storage and be more comfortable for guests, redesigned the head, redesigned our nav station after rewiring the entire boat, upgraded our batteries from AGM to Lithium (that we built), removed our toe rail and upgraded to a bulwark, installed a Bruntons Maxprop, created more storage under our steps, and in general try to maximise every space for logistical storage of equipment so no space is wasted.

What is the biggest challenge you have in servicing your boat?
Time and money. We are 22/23, and work so hard for our boat… a majority of our income goes straight to Avocet, which I’m sure many boat owners can relate to.

Do you have any advice for those looking to buy a Cheoy Lee like yours?
CHECK THE CHAINPLATES!

What’s the story behind the boat’s name?
She came with the name! An Avocet is a coastal wetland bird found in mid-northern latitudes. After some investigating we discovered Avocet had sailed in the Hong Kong to Philippines race waaaay back when before she sailed to Long Beach where the second owner, John, bought her and continued to cruise with his wife Robin and their family. His grandson is actually our age and follows us on social media which is cool! Long story short, we decided to keep the name out of tradition and because we couldn’t think of anything else that “fit”.

Check it Out
Click the gallery below for more photos and information about Avocet! 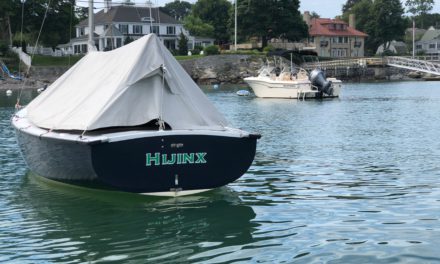 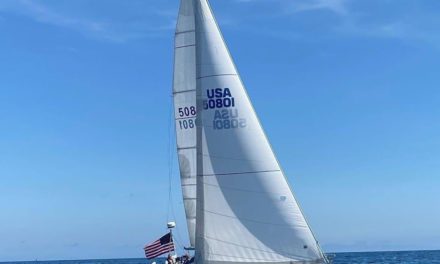