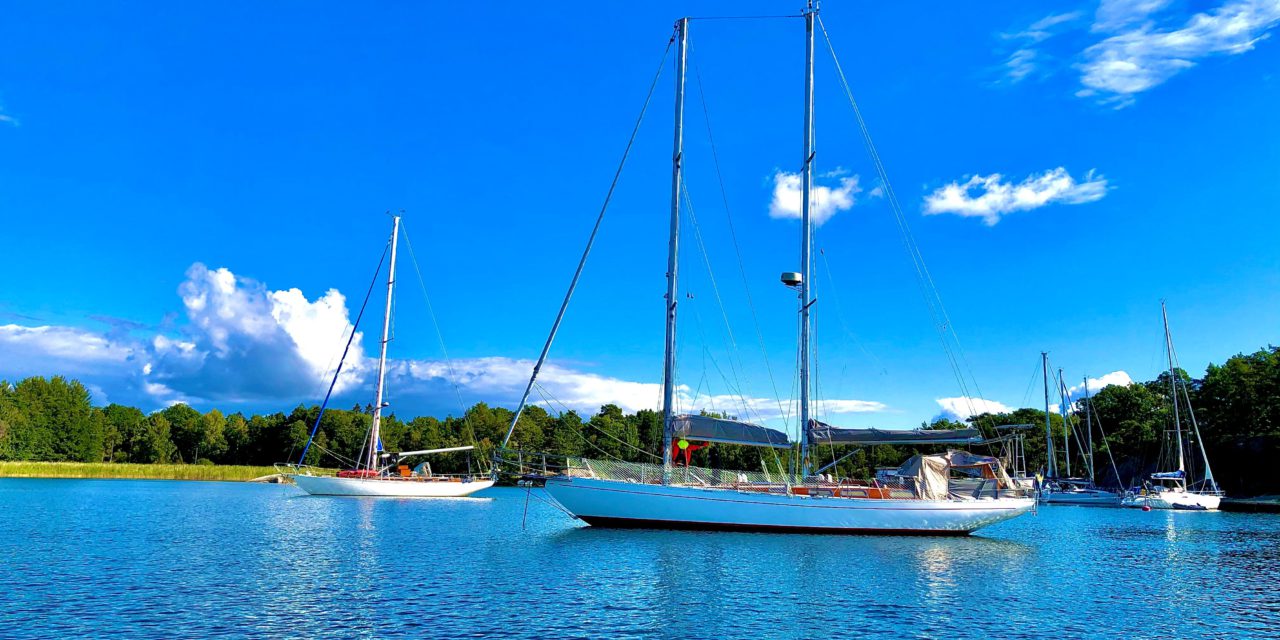 “My parents sold everything, and sailed away to the Mediterranean in 1984.  I was born 1986 when Argo was in Greece. I took my first steps on Argo in Greece 1987.  After that I sailed every summer on Argo…”

Interview with the Captain on Argo II – John Ravelius

Can you share a bit of the family history behind Argo?
Everything started 1974, My father Ingvar Ravelius was 24 years old when he was walking around a boat expo in Stockholm with his father Stig Ravelius.  Ingvar was Dreaming of a blue water cruiser that could take him around the world on the sea. The only boat he found that would fit his dream was a 1974 Nautor Swan 44, but it was over his budget.

At the same Expo he met a friend that told him about a boat being built, it was the first Opal 46 ever made. A week later he contacted the owner of the molds to the hull and visited the Yard building the Opal 46 together with his father.  When Ingvar saw what they were building, he picked up his wallet and made a down payment to rent the molds for the hull, my grandfather Stig yelled “what are you doing?” Ingvar answered “I don’t know how to build a boat but I will find out.”

He fiber glassed the hull and then transported the hull to his house in Sollentuna (suburb of Stockholm).  He was often visiting the yard building the no1 Opal and he took notes from a boat builder that was considered of one of the best boat builders in Sweden at that time. Because he was there very often, he became friends with the owner of the hulls and the first boat.

The build took him a total of 7 years but with a one year break. He sailed across the Atlantic ocean on the first Opal 46. On that crossing he learned a lot about the boat’s flaws and when he came home, he made some changes from the original.  She was ready again in 1982.

What’s the story behind the boat’s name?
Ingvar had a German Shepard named Argo, his dog was following Ingvar everywere, and they were best friends.

One time Ingvar was at anchor around 70 meters outside his friends house, he took the tender and rowed in to shore to talk to his friend and left Argo on the boat. When he was talking to his friend he noticed that his dog was behind him totally wet, and wondering why Ingvar left him on the boat.

How did you come to own a second Opal 46?
Ingvar is still the Captain of Argo. I grew up on Argo, and actually took my first steps on her deck. I have a lot of experience of sailing an Opal 46, I have almost never sailed on other boats.

I did not have a plan to buy a boat, and it was totally random that I bought Argo II.  At the end of the summer 2020, we had been refitting Argos teak deck for months of work by Ingvar, my mother Leena, and my brother Jeff and I.  We had just come home from a 10 days sail on Argo. That evening I, just for fun, went on the internet to search for boats for sale.  Usually when I do that, I sometimes search for Opal 46s, but only 6 of them were made so it’s not likely that I find anything. This time I did. I called my father immediately and told him about what I found.

He told me that he knew what Opal this was.  In 1984 when Ingvar and my mother Leena was ready to sail away to the Mediterranean on Argo, Ingvar was contacted by a guy that wanted to build an Opal 46 he had a chance to buy the last hull of the 6 hulls made.  He visited Ingvar and took measurements and tips from him, and some things he did exactly like Ingvar made them, some things different, he was ready with the boat in 1988.

It felt like it was my destiny to buy this Opal 46, I named her Argo II.

Argo II is a schooner.  Argo was built as a schooner but we refitted her to a sloop with a furling mast in 2005.  Argo II stands for several things: 2 masts, 2 companionways, and its the second Opal 46 in the family.

Argo’s hull is 12cm thick on the thickest part around the keel and saildrive, on Argo 2 its about 5-6cm.  My father made it really thick so it could withstand heavy impacts from containers or rocks.

Are there other Opal sister ships (and if so, have you located or connected with them)?
Yes, 6 hulls were made. We know all of them more or less.  But there are only 4 Opals that are equal, that really look like the original design.  My father had contact with hull no3 because they were building it at the same time as Argo, and of course hull no1 that he sailed across the Atlantic with.  I had contact with no 4 and 5. Our plan is to gather them all together, but I think Hull no 5 is somewhere in the Caribbean. Two guys sailed her to Saint Maarten 5 years ago and I think they sold her there.  I know that all the hulls are in Sweden except no5.

Have you owned other boats besides Argo and Argo II?
I have not, but my father has, he had a sailing canoe E-92 (In Swedish called E-låda) when he was a teenager, and a SK 30 (Skärgårdskryssare 30m2) when he was building Argo, SK 30 is a really beautiful boat and it was actually an Olympic class for SK 30 in 1920.

Who first introduced you to and taught you about sailing?
My parents sold everything, and sailed away to the Mediterranean in 1984.  I was born 1986 when Argo was in Greece. I took my first steps on Argo in Greece 1987.  After that I sailed every summer on Argo. So almost everything I know about sailing is from my father, and a little from my Grandfather Stig.

What are the features you like most about Argo?
It is the combination with the beautiful classic lines and her seaworthiness on the big oceans.  And there is room enough for 6 people and we still can sail her short or single handed easy.  One detail that I like is the Gimballed table in the salon that makes it possible so eat and drink comfortable while sailing.

What features/improvements have you added or do you plan to add?
Argo:
As i said earlier we refitted her from a schooner to Sloop in 2005 and that made her easier to sail single handed and more sail area.
– New Volvo Penta d2 75 engine with a folding propeller 2017
– New navigation systems such as plotter, Radar, autopilot. 2017
– Recaulked the teak deck 2020.

Argo II : I have not done anything yet.
The previous owner recaulked the teak deck 2020.  The first thing is to make a gimballed table for the salon.  Then the plan is to get her new navigation systems like we did on Argo.

How do you typically use your boats today, and where do you go?
These days we have only sailed around in the Stockholm Archipelago, we have plans for longer sailing but not yet.

Do you belong to a yacht club or other boating organizations (and what’s your home port)?
Yes, both Argo and Argo II is members of “SegelSällskapet Vega” in Stockholm.

What is the biggest challenge you have in servicing/maintaining your boats?
I would not say it is any diffrent from any other sailboat in the same size, except that the whole deck is covered in teak and varnished teak, so maybe a little sanding and varnishing.

Do you have any advice for those looking to own and maintain an older classic sailboat like Argo?
Take good care of it and it will last several lifetimes.

Check it Out
Click the gallery below for more photos and information about Argo & Argo II! 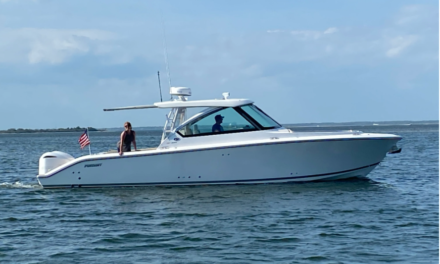 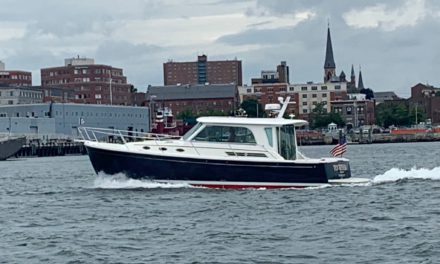 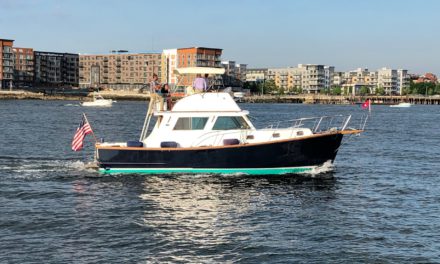 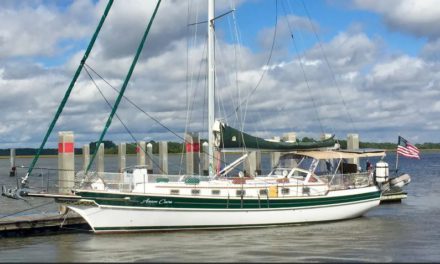