” We have sailed down the east coast from Charleston to Key Largo then across to the Bahamas were we went as far south as Long Island and as far north as Spanish Wells, hitting every island in between. “

Interview with the Captain – David Bunten

Who introduced you to boating/sailing?
While both of us have been around boats and boating from an early age it was on lakes, inland waterways, and coastal Florida and only motor boats. Sailing was something neither of us had ever done. We got the nudge from YouTube. Next thing you know two years later, we own a 41 foot catamaran and hired a captain to come aboard for a few days to train us on our new boat.

Where have you sailed to, and what was your longest trip so far?
We have sailed down the east coast from Charleston to Key Largo then across to the Bahamas were we went as far south as Long Island and as far north as Spanish Wells, hitting every island in between. Our longest trip was an overnighter from Parris Island to St. Augustine of over 150 miles. We’ve done several 75-100 mile day sails since, mostly in the Bahamas. We moved aboard permanently October 2020…we have plenty of sailing to do.

Any notable memories/stories from your sailing adventures?
Stories and memories is what living and traveling on a sailboat is all about. They need to be organized into categories along a spectrum of pure bliss to pucker up. The most glorious adventures are sailing days with great winds and easy seas that end at a calm, clear, white sand anchorage, just in time for cocktails.

Most under-rated piece of equipment for long-range cruising?
While this wouldn’t be found under the definition of “equipment” per se, since you really can’t install or load it up on your boat, but other sailors/cruiser are immeasurably valuable and highly underrated. The wealth of knowledge stored in the head of anyone that has been cruising more than a year will save you money, time and aggravation, while enhancing the overall experience with kinship and a sense of community. No man is an island.

Do you have any other notable resources you use (apps, devices, etc)?
We were pretty basic; using Navionics and Predict Wind along with our installed equipment; chart plotters, depth finders, wind anemometer and compass.

Why did you choose to buy this model/make?
We decided early on that a catamaran was going to be most conducive to our anticipated usage. While the monohauls are classic and sexy the comfort and deck room of a cat won out. We eventually narrowed down our search to the Lagoon 410 as it wasn’t too short or long, had good history as a sailing cat and quite frankly hit our price target. Without a doubt there are many other cats we could say had this, that or the other that we liked better, but in the end, buying a boat, like much of life, is a compromise.

What are the features you like most about your boat?
Comfortable cockpit and trampoline areas. Functional interior.

What features/improvements have you added or do you plan to add?
Removed the salon bench seating, replaced the salon floor, removed dining inside dining table and put it in cockpit, added and updated galley cabinets, hard top, 220 more amps to the battery bank, 920 watts of solar, new dingy and motor, new watermaker.

What is the biggest challenge you have in servicing your boat?
Diagnosing any issue. When everything is new to you it takes time to figure out what, if anything is actually wrong. We hunted down a fresh water system leak for a month. Eventually having to isolate sectors of the system to pin point it. We’ve been fortunate to not have any issues that completely hamstrung us because we couldn’t source a part.

Do you have any advice for those looking to buy a boat like yours?
Once you have narrowed your boat search down to a specific boat, which is a must or you will have way too many variables to make competent comparisons, look at several. Don’t get caught in this buying panic that any one boat will be the last time that model is ever seen for sale again. The boat market ebbs and flows and your desired boat will reappear again later. You don’t have to say yes to the first one. By looking at several, doing simple walk-throughs; not a survey and all, you will start to see similar issues and will better be able to notice the abnormal issues that you may want to be concerned about.

What’s the story behind the boat’s name?
Naming our boat was more difficult than naming both our sons. We made list upon list over the period we were considering this lifestyle and looking for the boat. We engaged friends and social media. In the end there is running joke between my wife (first mate) and her friends; “if something stays still long enough, Stephanie will monogram it.” It dawned us one day, let’s just monogram it D B S. “D”avid “S”tephanie “B”unten. Very easy to say and understand on the radio; Delta Bravo Sierra. Funny story, we sold a candle business to start this adventure and wanted to name it Wax Off. Say it a few times and you’ll figure out why that wasn’t a good idea.

Click the gallery below for more photos and information about D B S! 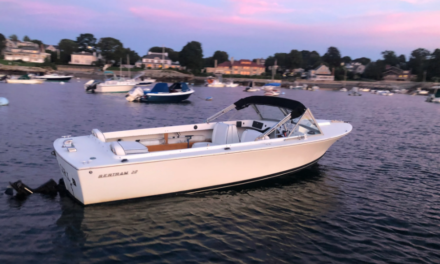 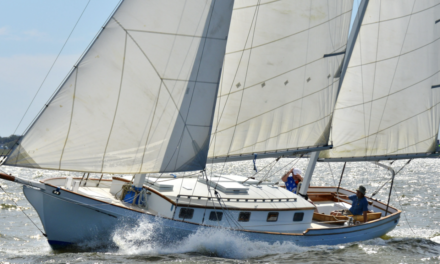