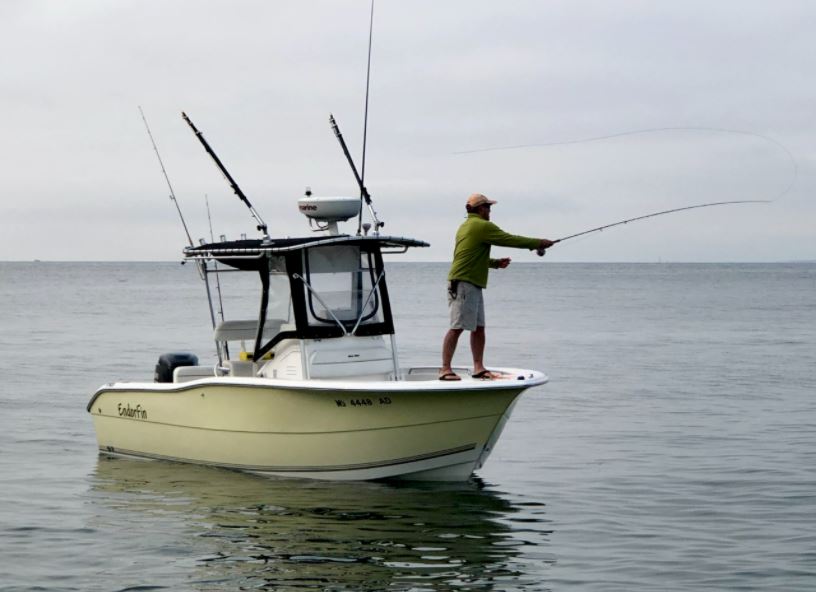 “Sure, you can buy fancy gear and a fancy boat, but its not gonna catch you fish. You need to learn by doing. You start to understand the feeding patterns, the bait cycles, the tides, and moon phases.”

Interview with the Captain — Rick Cuzner

Do you fish commercially or for pleasure?
Recreationally only. I had gotten my Captains License with thoughts of running a charter business on the side, but time on the water became limited with a growing family.

Who first introduced you to boating/fishing?
My father took us fishing a lot growing up. We had an old Cruisers Incorporated power boat and loved to go flounder and cod fishing.  When I get older, my brother really got me into chasing the bluefish and later on in life my good friend Adam Smith convinced me to pick up a fly rod, and I haven’t put it down since.

Do you have a favorite game fish (and/or season)?
Striped Bass. Hands down. It is just such an incredible game fish. September and October are my favorite months to fish. When I am not on the boat, I will be wade fishing the beaches with a surf rod or a fly rod. I am just as happy catching 16” schoolies with a fly rod on the back of the neck in the early morning hours as I am catching the occasional lunker striped bass.  I do love tuna fishing as well though. Schoolie tuna on a spinning rod is just such a rush.

What’s your most memorable catch (or story from a trip)?
So many incredible stories and experiences…..Spin casting for yellowfin tuna with good friends off the coast of Panama, catching 40 plus inch bass on flyrods before work, catching a tuna with my wife Julie, watching my daughters Katelyn and Susanna catching fish on their own. All great stuff. Even the days we get skunked are usually filled with memories and laughs. One of my favorite fishing days on Endorfin was a solo trip off the coast of Provincetown. There was somewhat of a tuna bite going on, I couldn’t find anyone to take a day off from work so I headed down solo before the sun came up. I hooked up about 30 minutes after putting the first bait in the water only to realize the fish was too big to be taken recreationally and had to be released. I was bummed to say the least. I put a second bait out on a kite rig and hooked up again. Somehow managed to boat the fish, out riggers all tangled in the kite line, etc. I was back at the dock in Marblehead by 9:30am. So many crazy days.

What’s your advice for less experienced anglers?
Simple, “TIME ON THE WATER”. It is the only way to learn. Sure, you can buy fancy gear and a fancy boat, but its not gonna catch you fish.  You need to learn by doing. You start to understand the feeding patterns, the bait cycles, the tides, and moon phases. I also think it’s really important just to have fun. Enjoy that time on the water.

Most under-rated piece of equipment or tackle?
That’s a tough one. Id have to say the line. Its so important to have good fresh line and most people probably don’t think much about it.  Nothing worse than getting out to where you want to be and you try to cast a set up with 5 year old line that ends up in a birds nest on the deck!

Do you have any other notable resources you use (apps, devices, etc)?
Weather Apps are great. Navionics chart plotting app is also very useful for planning and as a back up. Fishing clubs such as Maddies Anglers are also very helpful.

Why did you choose to buy a Sea Pro?
I had owned a smaller Sea Pro for several years and REALLY put it through its paces. It really held up well.  When I was in a position to buy a larger boat, Sea Pro had the then “newly redesigned” 23′ at the Boston boat show. My wife and I thoroughly checked it out and found it to be near perfect for what we wanted. We ended up buy the very boat from the show.

What other kinds of boats did you consider before buying this model?
We had checked out several other boats such as Grady White, Whalers, Regulator.  The SeaPro had what we wanted and at a budget we could afford.

How did you come to find/locate her before purchasing?
Stood on it at the Boston Boat show in the booth of a dealer that I had purchased a boat from previously. Immediately knew we were going to buy it.

What boats have you previously owned?
Other than Kayaks, and Skiffs (I built my wife a 12ft skiff with a Gaff rig sail), I owned a 19’ Sea Pro for 3 years.

What are the features you like most about your boat?
It nice to have a head, especially for the family trips. Decent live wells, large fish hold, decent rod and tackle storage.

What features/improvements have you added, or do you plan to add?
Added swivel rod holders for tuna fishing, new electronics, Epirb, wrap around canvas.

How do you typically use your boat over the summer, and where do you go?
Most of the time its early morning fishing trips either locally for Bass and Bluefish, or off shore for tuna, shark, and ground fish. The afternoons are mostly family trips. Rides to see the seals, whales, hang out at sand dollar cove and go swimming. Once in a great while I can convince my daughters to go fishing.

What is the biggest challenge you have in servicing your boat?
Honestly, I have no room to complain. No major issues other than corrosion on wiring and normal boat stuff. I am over the top on the service of my boat, especially in regards to the motor.

Do you have any advice for those looking to buy a Sea Pro like yours?
Ive been super happy with mine. The company has changed a bit and I am personally not too familiar with the new models.

What’s the story behind the boat’s name?
My wife is a Nurse Practitioner and I am obsessed with fishing.  At first we were thinking “endorphin” based on the chemicals released in the brain while doing the things you love. Then we came up with spelling it with an “Fin” instead of “phin”.   Seems fitting.

Check it Out
Click the gallery below for more photos and information about Endorfin! 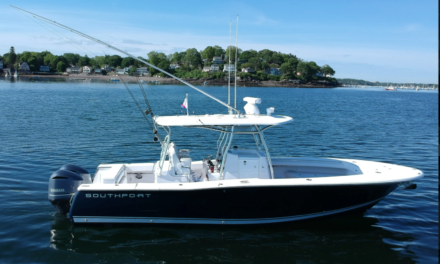 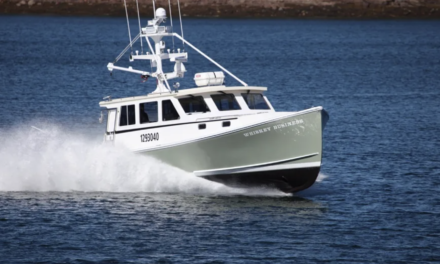 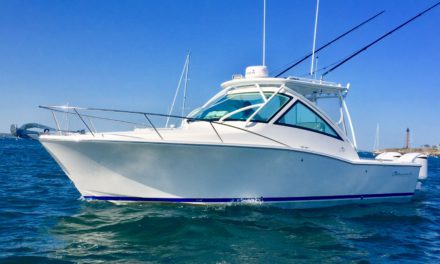 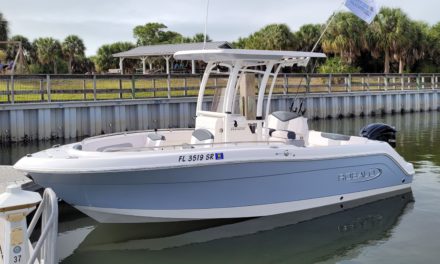